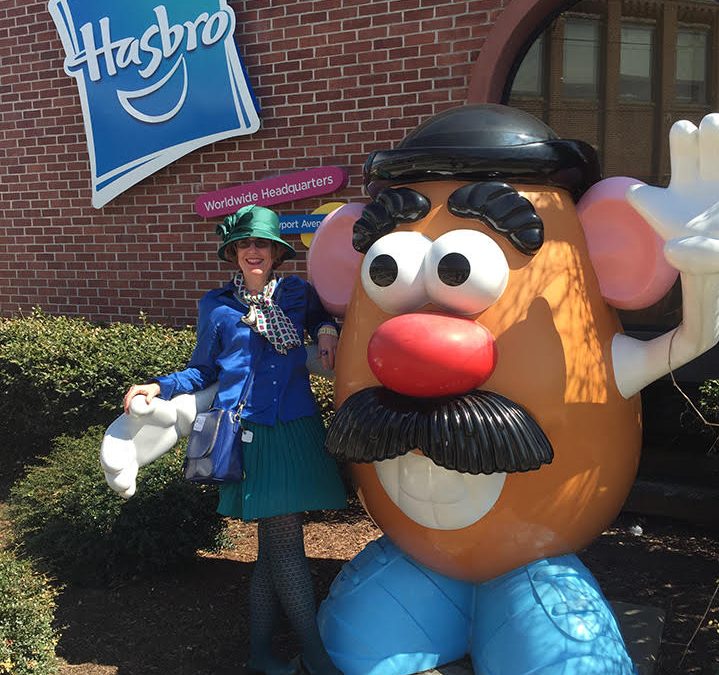 Celia Pearce is a 30+ year veteran game designer, college professor, researcher, writer, curator and co-founder of IndieCade. She is a frequent conference speaker and just had two of her games shown at Come Out & Play in New York, her first festival ever!

1. What are you currently reading and/or playing?
Summer is IndieCade jurying season, and I oversee the jurying process for the festival, so I am playing a whole mess of independent games, including local multiplayer games at our jurying sessions at Glitch City in LA. I also just got back from showing two games at Come Out & Play. Since we were running games, we really did not get to play much, but I got to play some games at the Kickstarter After Party which I really enjoyed, including State of Play’s “Adventure Society,” The Wise Guys’ “Rose Macbeth,” Matt Parker’s “Recurse,” and The Sheep’s Meow’s “Wrong Bet.”

2. First time you knew you wanted to work in games was…?
The first time I wanted to work in games was the first day of my first job in the game industry. I actually became a game designer by accident. In 1983, I was hired as a writer by ESI Design, a company I “thought” made interactive museum exhibits (which they did) only to find out they had hired me to work on a top secret project—a night club composed of multiplayer installation games. This project, incidentally, has just been completed in the form of ESC (Eddie’s Social Committee) which just opened up in two cities. I just got to demo some of their games, which were designed by friends I’ve made more recently through IndieCade.

After signing an NDA, the first day on the job they took me into this room whose walls were covered with concepts for multiplayer games. I had never designed a game or even thought about games as a career option. But I took to it immediately and have never turned back. I started out doing flow diagrams and writing concept documents, then headed up playtesting, and eventually became a senior game designer and project manager. It was an amazing job that forever cemented my passion for game design, as well as teaching me valuable design techniques that I continue to use to this day. The most important three lessons I took away from that job: 1) How to “play well with others,” which is really more important than any other single skill. 2) Always make your first iteration quickly, because everyone is going to tear it apart anyway. Save your cycles for subsequent iterations; 3) Perfectionism is the enemy of completion.

3. What was your favorite mistake?
When I was at my prior job at Georgia Tech, I started the Emergent Game Group {egg}, a student-based lab devoted to studying and creating multiplayer games. At one point there were 30 students in my group, which basically evolved into a large indie studio entirely run by students, who were able to work together on projects for credit. This experience was the highlight of my academic career. There were lots of cool games that came out of this group, but my one regret is that we were never able to finish our first project, Mermaids. It was an underwater fantasy MMOG where you collaborated with other players to restore the lost Mermaids’ culture and repair the damaged ecosystem. Many many students worked on the game over an eight-year period and were never able to finish it. We had two major hurdles here: underwater, and networking. It’s hard enough to make an MMOG when you have millions of dollars and a staff of hundreds, and in retrospect I realized that trying to do this with a student-led team was probably insane. There were so many wonderful students who worked on it over the years, some of whom are now going on to make a mark in mainstream and indie games. The work they did was fantastic. I still harbor a secret fantasy of one day getting funding to finish Mermaids. It was such a cool game with so many innovative features.

4. What was your favorite success?
IndieCade is by far the most successful and influential thing I’ve worked on. Stephanie Barish, Sam Roberts and I started doing showcases in 2006 and launched the festival in 2008 with 30 games exhibited in a single room, selected from 93 submissions. At that point in the process, we literally did everything ourselves, right down to installing the games and plugging in the computers. This year we surpassed 1200 submissions, and our October festival has taken over all of Downtown Culver City. We have a small production staff, sponsors, and an army of chairs and volunteers who run everything. We host the indie booth at E3. We have had a part in the success of numerous indie games, and through our sponsors and partners have helped to create a robust indie game industry where it’s possible to make your living creating and publishing indie games. When we started, it was almost inconceivable that an indie game could be published on a console. Now this is commonplace, and we have all the major console players on-board. The most gratifying thing about IndieCade is that it has blossomed into this amazing community of people who all work very hard every year to make it all happen. We even have an East Cost event in New York in February and are planning to expand to Europe, all because people love it and want to get involved. To me that is the most gratifying aspect of doing IndieCade—that people want to be a part of it. I always say, “It takes a village to raise a festival.”

5. What’s the best advice you ever got?
When I worked for Ed Schlossberg at ESI Design, he said something to us once that always stuck with me and which I think has formed the foundation of my career. “Society encourages us to conform, but rewards the people who don’t.” The principle whereby I’ve built my career is to look where all the lemmings are running and go the opposite direction. I am a serial instigator. I like to start new things, to do new things. I started designing games when the medium was in its infancy. I was making VR two decades before it entered into the mainstream, I helped launch some of the first academic programs in game design, and I’ve been very lucky to be implicated in the rise of indie games.

6. Share one thing few know about you.
I used to write music and sing and had a “post-punk folks blues” band in the 1990s.

7. What’s one thing or trend you’re most excited about in the industry?
I’m going through this phase where I am not interested in doing things involving screens, and more into live games and tangible games. My new group, Paidia Studios, which is me and my grad student and collaborator Jeanie Choi, just showed two physical games at Come Out & Play. One involves smashing candy with hammers, the other is played on an analog overhead projector. Being at Come Out & Play was very inspiring, as I think there is a lot of innovation happening in this “live games” space, and I’ve also been getting into LARPing and continuing to work with ARGs. I feel like people being together in a shared space playing is the “killer app.” I’m also working on three projects that involve electronics and arduinos, including this new Kickstarter project I just launched called Lovepoppet, which is a prototype for a pair of networked handmade dolls that allow people to send gestures of affection remotely to loved ones.

8. Anything else you want to add?
My biggest frustration with the game industry continues to be the lack of diversity, especially with respect to gender, but all around, and this problem seems to have gotten progressively worse since I’ve been in the industry. At my first job at ESI, we were half women, and women held many major management roles in the company. In the 1990s there were many women executives at big companies heading up “multimedia” divisions, and women creating cutting-edge CD-ROMs. On my VR project, three of the five middle management roles, including the lead programmer, were held by women. In 2013, I co-curated XYZ, an exhibition devoted to women game designers. I continue to work on games and gender and diversity issues, and will be tackling this problem with renewed enthusiasm in the coming years. Stay tuned for more!