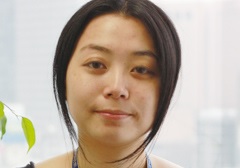 Yurie Inoue is a programmer based out of Tokyo. With experience setting up servers and programming on platforms ranging from Playstation 2 to PC, Inoue is currently developing games for mobile.

THIS PROFILE WAS ORIGINALLY POSTED NOVEMBER 2014

Shipped Game Titles:
Ragdoll (iOS / Android) – 2011
*there are numerous other titles that have been omitted due to contractual obligations

1. What are you currently reading and/or playing?
I really wanted to play mobile games on a larger screen, and bought an iPad recently. So I’m currently playing a bunch of mobile games. They’re really appealing to me since you could jump in and play, or stop, at anytime.

The books I’m reading are also related to Android and iOS game development at this time.

3. What was your favorite mistake?
It was a fairly long time ago, but I was working on a project that had become a death march (in other words, a project that was unlikely to succeed). The amount of overtime and late nighters came to a point where my skin got really rough… and I learned the hard way that no matter how busy things got, it was important not to neglect skin care.

4. What was your favorite success?
There was an in-house project where, in spite of my inexperience, I was placed in charge of setting up the project’s servers (including infrastructure development and API design implementation). When it came time for release, the app had no major server issues and was operational.

That was what my boss said to me when I had just started out in the industry and had little confidence in myself. I had a lot of self-doubt about things like my code implementation, and those words of encouragement were very uplifting to me.

6. Share one thing few know about you.
I’m a very open person, and so don’t really have anything that few know!

7. What’s one thing or trend you’re most excited about in the industry?
There are a lot of casual games being released these days, and it’s not just hardcore games anymore. It is becoming increasingly easy to release games and apps. In this modern age, anyone can become a game creator.

What I am looking forward to is the industry becoming easier to break into for those who are passionate about making games, so that there are more people to work together with. I look forward to supporting those individuals as well!

Special thanks to David Sim Wei Lun for translating this interview from Japanese and Kenji Ono of IGDA Japan.