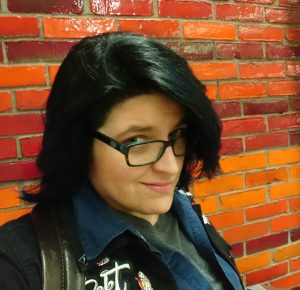 Anne Farmer is an American living in Quebec, Canada with more than 10 years of experience in the industry.  She has worked her way up from Quality Control testing for THQ to closing projects for Ubisoft Montreal.  She’s an expert in closing, having worked for the past 5 years on brands like Watch_Dogs, Assassin’s Creed, and Far Cry.  Most recently, Anne took up a place in the resistance to help the Far Cry 5 team bring Hope County, Montana to the world.

0. What is a Closer?
The Closer is a specialized position with an expertise in shipping games and assessing the risk on titles in production. They’re an objective team member who doesn’t report to the production directly and helps the team to make difficult decisions to ship the game with the maximum quality in the time remaining to ship. Closers are an independent outside force working with teams. They’re the dispatcher, not the firefighter.

1. What are you currently reading and/or playing?
I’m always reading and playing multiple things so this is always difficult for me to answer without a monster sized list.

Playing:
On my Switch I have Zelda: Breath of the Wild, which has been an amazing experience in exploration. I’ll be starting Mario Odyssey soon.
On my PS4 I’m a little behind in my backlog. I’ve got Far Cry 5 running now but I’m also finishing Horizon Zero Dawn: Frozen Wilds DLC. I’m also about to dig in and start Final Fantasy XV next.

2. First time you knew you wanted to work in games was…?
I didn’t even know “working in games” was an option until I was in High School. I knew I loved games but I wasn’t really aware of the opportunities until I started looking at universities and a recruiter asked if I was interested in Game Design.

3. What was your favorite mistake?
Every game I’ve worked on has had a series of mistakes and it wasn’t ever the mistake that mattered: it was how we handled it and what we learned from it. I wouldn’t have the management skills I have today if I didn’t make a ton of mistakes and admit I messed up. I took up the mantra to “do better next time.” I’ve been lucky to work within teams that called out mistakes and gave people space to grow.

My favorite mistake was early in my career as a QA Supervisor. I was working on a game and we needed to submit it for age ratings but the final cutscene was an animatic and definitely not ready. My team called this out during testing and were told that it was fine so the team gave a conditional go but flagged the problem and moved on. Shift to one year after the game’s release: We start getting customer complaints about the game and the ending telling us how the ending traumatized their children. Then we got a notice from the ratings board that the game was not E for Everyone and we could either change the cinematic at the end or change the packaging.

To this day there are two versions of that game: One where the main character’s parents die in a car accident and one where the character just fell from a tree and hit their head. I use this example any time anyone asks to add anything to games after we’ve shipped to age ratings boards.

I will never, ever forget that and I’ve made sure to take that lesson to every single project.

4. What was your favorite success?
Most recently: the Launch of Far Cry 5 and the positive impact I had on the production. This was a huge undertaking and a big game which posed a number of challenges and changes for the brand. Closing is about managing risk, managing the schedule, and managing priorities to ship on time at the highest possible quality. As a Closer, it’s my responsibility to ride the line between “good enough” to fit in the time and “this needs to be better,” and I did that well with the team on Far Cry.

We had a massive team pushing to get this game done, and there’s always pressure when you have a game like this. This was also one of the largest games I’ve worked on as a Closer, and I’m proud of the game we were able to ship.

I also helped to make sure we got the suggestion in from our Producer so we could pet all dogs in the game. Our Animals team did a great job implementing doggo petting in Hope County.

5. What’s the best advice you ever got?
This is a difficult question because I’ve received so much feedback and advice from some very powerful and inspiring mentors over the years. I’ll go with what was probably the oldest piece of advice that had the largest impact on my early career through now, however:

It’s a quote from a former boss and dear friend and it was something along the lines of: “Anne. We’re making Video Games; we’re not curing cancer.” The point was both if you make a mistake someone isn’t going to die, and we’re working to create fun for players so we should be having fun.

When I start feeling stressed out about something I stop and I repeat that quote. It brings a sense of calm because we are making games. We should be having fun while we’re making fun.

6. Share one thing few know about you.
I own those Tiny-Bee gun PS2 controllers that they made for Final Fantasy X-2. It’s both the stupidest and best thing I have ever bought.

7. What’s one thing or trend you’re most excited about in the industry?
I am so excited to see games moving more and more online. At my heart of hearts: I’m a co-op player. I remember playing Teenage Mutant Ninja Turtles CO-OP with my cousin when we were both little, and I’ve never lost that thirst to play with other players. My cousin and I still play games together and that relationship has really formed the way I interact with and expect to interact with games.

I also like seeing the trend of softer, non-violent games (like Stardew Valley). I hope this trend continues.

8. Anything else you want to add?
Build a strong, good support system with people in the industry. Real support: not networking. Build trust, and support your close industry friends. They will literally save your life when you’re having a hard time, and it’s important to have people to laugh with and share successes, failings, and general ridiculousness with the people who “get it.”