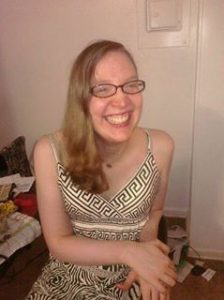 Kaitlyn Burnell is a video game programmer, Canadian, and Mathematician. Based in San Diego, she currently enjoys Starcraft 2, Magic the Gathering, and Heroes of the Storm.

1. What are you currently reading and/or playing?
Still playing a lot of Starcraft 2, much to the frustration of my designer friends who want me to play a dozen recent indie games. I believe my sustained interest is largely the fault of Sasha “Scarlett” Hostyn. …When my friend told me that a girl (Scarlett) won the WCS Canada Starcraft tournament, my initial reaction was doubt: “Did Huk not play?” But I was pretty excited to hear actually he did play, and she crushed him. Been a fan of her ever since and this has influenced me to try things I might not have otherwise tried in Starcraft 2. Like…before I considered myself pretty casual; there were things I would just not bother to learn because I was just playing to have fun (like I did not learn the creep spread mechanic). Now I want to be good at creep spread like Scarlett. Before I didn’t pay too much attention to tournaments. Now I watch some live in person and have signed up for some online tournaments myself. All of this has caused me to continue playing longer than I probably would have otherwise.

And this tells an interesting story about role models too. You would think that, having taken a male dominated major in university, pursuing the field further in grad school, and then proceeding to work in a different male dominated field, that I would no longer need the influence of female role models. At least, I assumed this about myself. Thinking on it, though, I came up with a metaphor that explains my behavior. …Imagine a woman about my age in 1980. She has kids, and has entered some type-in games from COMPUTE magazine for her kids. Sure, she’s entering code, but she just does it for fun. No real thoughts cross her mind about getting better at coding. She probably has never considered the idea of writing game code as a career. Now take this woman, and show her a news story about a highly successful woman who started out doing exactly what she did for fun, copying game code from a magazine, and then started making her own games, and then selling her own games, and within a year had made thousands of dollars. It’s an inspirational story. Would the mom drop everything and follow in this woman’s footsteps? Probably not–she’s tied down. But she might try to do challenging things in code she’s never done before. She might continue coding for years longer than she otherwise would have.

Anyway, that was a massive tangent. In non-starcraft games, I’m playing a decent amount of Magic the Gathering during lunch breaks, and am playing in a P&P Shadowrun campaign. I also play a variety of tabletop games once every couple months.

2. First time you knew you wanted to work in games was…?
Well… that depends how seriously you want to take an 8 year old. My father had me programming in BASIC, and I tried to use it to make a game. Actually my “game” was a castle which slowly drew itself in from draw line calls and contained no interaction. But the desire to make games was there. I would later make more successful attempts with Hypercard and map editors. And…I know for a fact there’s a journal somewhere in my room with game ideas involving Mario characters having kids (a brother and sister–you could play either) in some kind of coming of age story involving Rachmaninoff music.

Anyway, my family convinced me that games were not a career path, and that I should get a good solid education by getting a real degree first, and that if I was still interested after I “grew up”, then I could consider it. And they successfully steered me away from game development…for a while. I was quite convinced that I would someday be a professor in Mathematics. Part way through my grad studies, though, I realized I was spending a lot time creating a website about games, writing simple code to do probability calculations about game balance, and so on. (More time, in fact, than I was spending on my thesis). So…I finished that degree, and decided to give game development a try. Haven’t looked back.

3. What was your favorite mistake?
This one time, I was reversing the endianness of a block of data to pass it between different hardware, and the size of the file was a part of the data block I was reversing, and I somehow forgot to put the size into a local parameter in the loop. So…I reversed the endian-ness of 0x36000000 bytes of memory instead of 0x00000036 bytes of memory. And…it ran perfectly fine in non-final builds (because it reversed everything in memory twice over). My coworker crosschecked the code and also didn’t spot the error. And so I checked it in, and then… people’s dev kits started red lighting. Extremely catastrophic, and such a basic coding mistake that neither of us spotted. But shortly after fixing it, it became very funny, and a running joke for the rest of the project. “Don’t worry about it, it’s not like you wrote over literally everything loaded in memory.”

4. What was your favorite success?
Hmm…this isn’t my greatest success, it’s not even a programming story, but it was unexpected success and it’s probably funnier to read about.

First, a little bit of background. CCP was a company that had hired some percentage of its employees from its fanbase, and the fanbase includes a lot of people from Something Awful. So…the culture at CCP was (sometimes) a culture of internet trolling. Bear this in mind before you judge me too harshly for this next bit.

I worked at CCP North America, which is formerly White Wolf publishing, creators of Vampire the Masquerade. Many of the original authors of the gothic pen and paper games still worked at the company back then. As you can imagine, these are exactly the kind of people who hate Twilight. So…I decided to troll them a little by writing an email series called “Weekly Twilight”, where I would take a quote from a Twilight book, explain how it was exactly like something in Vampire the Masquerade mythology, and then talk about how this could be done in gameplay, or suggest some shader code that could produce this kind of visual effect, or whatever I came up with, really. What started as a bit of a troll attempt ended up a popular email series, triggering a number of brainstorms where people thought more deeply about the Vampire the Masquerade setting, and it also gave me some game design ideas that turned into a GDC talk.

5. What’s the best advice you ever got?
Fundamentally programmers are problem solvers. If you have a problem, maybe you should solve it.

6. Share one thing few know about you.
I briefly held the speed run world record for Super Metroid (0:43 I think?). This was more than a decade ago, so there wasn’t much competition, and it was mostly about being in the right place at the right time (I was the first person to try a speed run with the “mach ball” glitch). But it sounds cool.

7. What’s one thing or trend you’re most excited about in the industry?
In general, watching people play games. “Let’s play.” “Streaming.” Game tournaments showing up on broadcast TV.

To put things into perspective, back when I was in undergrad, for an English essay I decided I wanted to observe someone playing a game, take notes on where they got stuck, how they responded to certain events. So…I got out my notepad and convinced my father to play a game he had never tried…while I observed him taking notes. Whenever he got stuck and asked me for advice I would tell him “pretend I’m not in the room. I’m trying to be scientific here.” Thankfully, he and I still on speaking terms.

These days, you can get all of this kind of research for free from a “let’s play”. In fact, you can see people playing through the games you worked on, seeing where they get stuck, listen to the criticisms they’re voicing. You can see what they care about and what they don’t notice. It’s a fantastic resource.

Of the new features on the Xbone and PS4, PS4’s built-in streaming has me the most excited.

8. Anything else you want to add?
Umm… let’s see… I will say, if you’ve never worked on a fighting game, it’s a highly entertaining experience. The genre is so focused on characters and character movement that you’ll be walking down the hallway of your office and see the following work-related discussion “hmm, what if the character did THIS?” *kung-fu pose*. That never gets old.