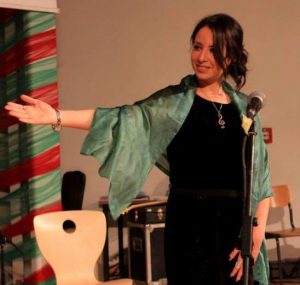 Hayat Selim is a composer, sound designer, and singer-songwriter who hails from Cairo. She won the Young Talent Award for game music in 2016 in Hamburg. She has studied composition in MediaSoundHamburg as well as digital media engineering and technology.

2. First time you knew you wanted to work in games was…?
Initially my dream was to be a film composer, and it is a dream I am still pursuing. However in 2015 I received a scholarship to attend MediaSoundHamburg, the international summer academy for film music, game music and sound design, where I had the opportunity to attend a master class in video game music with the “Sound of Games” composer Michael Stöckemann. He wrote the music for “Clash of Kings” and many other games. During the master class, I found myself a natural at writing music for games, as I had been a hard core gamer since I was 5 until I was 16, when all my focus was shifted to music. Up until that moment, I had no idea there was a game development industry in Egypt. When returning to Egypt, I started researching and stumbled upon a huge and wonderful community that initially grew through the Game Development Course at the Information Technology Institute in Cairo. Slowly I started introducing myself there and was very lucky to be very warmly welcomed among the community and soon enough started getting my first jobs. The Egyptian game development scene became my comfort zone and it has been truly blissful working with many wonderfully creative people and teams since.

3. What was your favorite mistake?
Going for a Bachelors in Digital Media Engineering and Technology. I was very good at almost all subjects at school, which made the decision on a major very difficult. A part of me loved math and science, and I used to participate at international math competitions at school. Another part of me loved the creative side. I was always in choirs, always performing and sometimes wrote and directed my own plays. I was also very good with languages and a lover of technology. Choosing a college major was very difficult. By going for digital media engineering I literally tormented myself with tedious coding, yet music became more and more my escape method during that time. I found myself discovering my potential and passion for it, and I just knew that this is what I want to do for life. If I had been in a less demanding major such as linguistics or so, I may have never taken music as more than a hobby, and it may have always stayed something to the side. So yeah, picking a computer science related major was the best mistake I ever did! Not only did it allow me to discover my potential in music while escaping it, but it made me very familiar and fast with learning new software. It also made communication with game developers in the future smooth since I could understand most of the technical terms used.

4. What was your favorite success?
My work for “Initia: Elemental Arena.” This was my first project, and it was a perfect start, since it was a medieval (a bit Celtic) first person shooter game, which is a genre I am in love with on all possible levels. I turned two of the orchestral pieces I wrote for Initia into string quartets (pieces for two violins, viola and cello) to participate in the “Young Talent Award Game Music 2016” composition competition in Hamburg, Germany, which thankfully I won. The competition was about writing two string quartets in parallel staffs such that when a sign is given to the musicians, a smooth transition from one piece to another takes place while two different worlds from the game are shown. It was honestly one of the best experiences I have ever made.

5. What’s the best advice you ever got?
An advice I got from Filipp Issa, producer of “Sound of Games”: To stay a people’s person! It is very, VERY easy to slip into the introverted life of a composer in his/her studio not willing to interact much with the outer world. However, in the media field especially, this simply does not work. Skills and talent are not enough. One needs to have good communication skills, the ability to easily connect with people, make friends with one’s clients and also be able to manage one’s own business and marketing; at least in the beginning when one cannot afford to hire somebody to help with that.

6. Share one thing few know about you.
Before starting to pursue composing for the media as a career, my dream was actually to become a Broadway star since my music path originally started with performance. While growing older, I became more and more fascinated with the idea of becoming a creator of music and not only a performer, which was very easy to combine with my passion for film and games since childhood. It was like a sign from up above that this is the right combination of all my skills.

7. What’s one thing or trend you’re most excited about in the industry?
The best thing about this industry is that it is a relatively young one that has so much room to grow, especially with the exponential growth of new technologies. It is an even more fresh field in Egypt, which allows a very large space to grow, innovate and introduce something different. Most of us in the industry come from similar educational backgrounds and age such that so far communication has been very smooth. Almost every game developer in Egypt is under age 30, and there is just so much room for flexibility, risk taking and throwing one’s self out there. Many Egyptian studios have been able to compete with the international standards in a very short time.

8. Anything else you want to add?
Hmmm… I would say I think we are very lucky to be working in this industry. In the most difficult political and economic time in Egypt, it is wonderful to be doing a job where you enter outer worlds, lives of others and fantasy worlds all the time. Games and movies give people hope, motivate them and help them to cope with many difficulties. With the rising trend of VR and AR games, there are endless possibilities to use games in so many aspects of life that are not necessarily in the entertainment field; education is one of them.

I think it is a blessing to be able to contribute to that one way or another and of course, to experience other lives and cultures all the time…