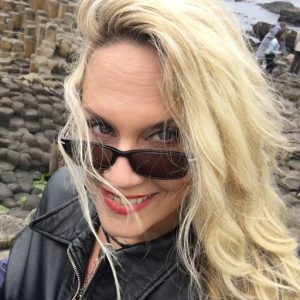 In honor of International Women’s Day and Women’s History Month, we’re going back to our first WIG SIG Profilee, who was none other than Brenda Romero! We’d like to thank Brenda for her service to the industry and the SIG!

1. What are you currently reading and/or playing?
Playing: Hotline Miami, FTL.
Reading: Bury My Heart at Wounded Knee by Dee Brown

2. First time you knew you wanted to work in games was…?
When the opportunity presented itself on October 1, 1982. I didn’t know working in games was a thing one could do! I come from a small town, a farming community in northern NY. Fortunately, a game company, Sir-tech Software, opened there. I had been playing games for years and even making my own non-digital mashups (rewriting rules to games). So, when the opportunity presented itself, I jumped at it. All that said, I think it’s fair to say that I knew I wanted to work in games shortly before I graduated college. I remember traveling to interview at companies like IBM because, well, that was what you did when you graduated college. But, man, it wasn’t for me. I ended up coming back to Sir-tech, leaning in the door of an owner’s office and saying, “I think I want to just keep making games.”  I stayed at Sir-tech for almost 20 years.

3. What was your favorite mistake?
Staying at Sir-tech for 20 years. Hah. Though it makes me laugh to say it, it is probably true. Don’t get me wrong – I am grateful for every moment I spent at that company. I had a chance to learn from a lot of great people and worked on games I am very proud of. At the same time, I worked at the same place for 20 years, was exposed to the same patterns of thinking, the same design methods, and stayed within an hour of the same geographic center. As much as I love where I come from, it is not the hotbed of game culture. I needed to be exposed to so much more. Getting out of that bubble changed me in many ways and continues to give me the experience I need.

I say this is a “favorite mistake” because I could have done something different, but being a part of the development of Western RPGs is a gift.

4. What was your favorite success?
It’s Train. I made that game for me, to see if I could capture a difficult experience in game mechanics. I wanted to make a game as well as I possibility could, at the peak of my skill without regard to time or budget. Though I never intended to release it, I have been incredibly honored by its reception in both the game and art communities. Being invited to bring it to GDC remains a high point of my career. I have an oddly personal relationship with Train in that it lives with us, unless it is in a museum, and is usually played in my presence. I have seen people cry, come to peace with their past, and explore what it means to blindly follow the rules. I’ve had game designers I deeply admire study its rules for hours. That’s just humbling as hell. I am grateful for having had the experience.

5. What’s the best advice you ever got?
Must I pick just one?

If the computer is having more fun than the player, you are doing it wrong (regarding the designer’s tendency to have a lot of fun in system design). Keep it simple. I think this came from Sid Meier.

Divide or multiply by 2 when trying to balance something. Also Sid Meier.

Always fight for the credits. Make sure you get your name in the game. It matters. Shaun Lyng.

It will work out all right. John Romero, who, after 140+ games and the founding of 9 game companies, has seen it all. He remains my biggest inspiration.

6. Share one thing few know about you.
Hm. Here’s one. When I was 13, I lost all my friends. A friend of mine took alcohol from her parents for a sleepover, blamed it on me, networked with other parents, and as a result, I lost most of my friends. It was a terrible time in my life, but it shaped me in positive ways, too. I became determined. I spent a lot of time playing and making games. I became independent and also hung out with different groups of people. Among my closest friends are the “brains” and the “cons” from my old high school. That continues to give me perspective few have. My two closest friends at graduation were very different – one went to Syracuse University and the other went to jail, and I love them both the same. And the story had a beautiful ending, too. Thirty years later, the women at the beginning of this story contacted me out of the blue and apologized. I had long since forgiven her and made peace with it myself, but what happened really sat heavy on her soul. John and I visited her the next summer. It was beautiful. She’s a great woman with a beautiful family. I am glad to have her back in my life.

7. What’s one thing or trend you’re most excited about in the industry?
The return of the mechanic. In the indie game scene, there is not a graphics arms race going on.

8. Anything else you want to add?
Make a game all by yourself. It remains the most educational experience I’ve had.