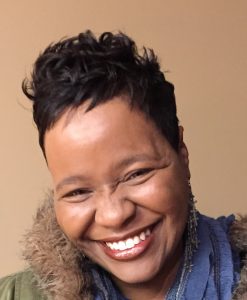 Shana T Bryant is a Producer and a Level-14 industry veteran, who has successfully completed the Capcom, Midway Games, and Electronic Arts quests. She has had a hand in crafting some of your favorite games in the Devil May Cry and Resident Evil series (and might’ve even canceled a few). Most recently, she’s been bringing her expertise to AR/MR experiences, working with NASA and JPL to transport visitors to the surface of Mars.

Shana speaks candidly about her experiences as a woman of color in the games industry. She is a passionate advocate of diversity and inclusion and is always open to a lively debate, whether in a coffee shop or over some boardgames. She expresses herself in comics, with spoonful of southern charm and just a tinge of pith and snark.

Shana is an industry contributor to the 2016 academic publication Diversifying Barbie and Mortal Kombat. Also, at 2016’s Grace Hopper Conference, Shana led a session on designing inclusive interactions for emerging tech, such as HoloLens, wearables, and other smart devices.

For a deeper look at what makes Shana tick, check out her blog at theMushroomQueendom.com.

1. What are you currently reading and/or playing?
I think I’m nearing the end of the Lara Croft sequel Rise of the Tomb Raider. Up next is probably either Resident Evil VII or The Last Guardian. (Oh, and I still need to go back and get the better ending for Inside.) Decisions, decisions.

2. First time you knew you wanted to work in games was…?
My dad bought sis and me an Atari 2600. I remember just pouring hours and hours into Joust and Warlords and freakin’ Yar’s Revenge. And somewhere in there, I just said to myself, “You know, this is somebody’s job, making these things. Yeah, I wanna do that.” I was maybe 8 or 9. My parents wanted me to be a doctor. My mom still wants me to be a lawyer. <laughs>

3. What was your favorite mistake?
A mistake I made? Hah, there are so many to choose from! Let’s see, here’s a fun one.

When we shipped Dark Void Zero on iOS, we realized too late we’d accidentally left the debug God Mode toggle in the build. Shoot. So, we scrambled to get a new build submitted and posted to the App Store, turned it around in record time. Bam, problem fixed, right? Nope! We’re suddenly getting all these reviews asking “Where’d God Mode go??!” and “Bring back God Mode!!” So we’re like, “Whoops, okay, people actually liked that in there.” After all this is a Capcom game, so as usual, it’s Capcom Hard™, and Capcom Hard™ plus twitch-gameplay-on-iOS equals Capcom Hard™ x 10.

So, we made another tweak. We added the God Mode toggle back in, disabled achievements if you had it on (no cheating, yeah), and boom, new feature got added post-ship. The fans demanded it. Hah.

4. What was your favorite success?
Hmm, I really want to talk about Dark Void Zero some more, because it was absolutely a delight to work on (and it’s awesome), but a close second would have to be Devil May Cry HD. If you’re not familiar, it’s just what it says – an HD uprez of the first three Devil May Cry games, reintroducing fans to the DMC franchise in advance of the new DmC Devil May Cry.

Pretty straightforward, you’d think, but just getting our hands on the source code was a challenge. I mean, we’re talking about code that was written over a decade ago, before digital archiving was even a thing that people thought about. After months of searching through archives, we wound up with something like only 60% of what we needed. I won’t get too too far into the details, but let’s just say, we had to get creative. We shipped a great game, but lives were lost. (Ok, not really. This is videogames. No one actually died.)

When you’re playing Devil May Cry HD, just remember you’re playing a triumph of the human spirit. Good luck with some of those achievements, by the way. They were so hard they made some of my testers riot.

5. What’s the best advice you ever got?
All feedback is valuable.

I don’t know if anyone ever explicitly said those words to me or if it’s something I just eventually picked up from working alongside some amazing Games people, but it’s easily one of the most important lessons to learn in this industry.

Now, I know what you’re thinking. “Some feedback is garbage,” you say. “If some dude just tells me ‘your game sucks,’ what am I supposed to do with that?”

Well, the answer is nothing. That’s the beauty of feedback. Once you get it, you get to choose what to do with it. You can go all in on making changes, or you can throw it away, but what you can’t do is avoid it.

Just know that when you put your Amazing Creative Thing out there in the social public game-o-sphere, it’s going to happen: someone is going to criticize your baby. And chances are, some of ‘em aren’t going to be particularly nice about it (see: the internet).

To be honest, managing feedback is one of the most difficult things about being a Creator, whether or not you’re new to the industry. We all struggle with it, and figuring out how to accept criticism is a skill. No, it really is. And it’s a damn useful one.

Now, how to do it? Well, sometimes, it’s easy: you get “unactionable” feedback, which is typically vague, imprecise, or just completely wrongheaded. That’s easy to filter. But(!) sometimes, the feedback you get is heartbreaking, specific, validated, and spot-freakin’-on. As a Creator, you’ve gotta be open to both praise and critique. Praise feels good, but critique is what helps us make better stuff and generally become better developers. And regardless of whether you ultimately yea or nay a piece of feedback, hopefully the whole thing is something you can learn from.

P.S. When you get really good at accepting feedback, you can even learn to coax something actionable out of the dreaded “X sucks.” If you’re persistent, you can turn it into a teaching moment for the critic, and then both of your lives become easier. Yay. Win-win.

6. Share one thing few know about you.
In addition to game dev, I’m an artist, and I’m kicking off a new indie comic series titled “terrible allies.” It follows the mythic exploits of a handful of marginalized folks and their allies all trying to navigate life-and-politics and games-and-politics. Check it out at www.terribleallies.com.

7. What’s one thing or trend you’re most excited about in the industry?
The increased openness when it comes to discussing diversity and inclusion issues in the industry.

It’s here where I have to get a little serious, because for years, the industry more than just ignored the “diversity problem;” when confronted with it, we straight up ran-screaming-from-the-room. But finally, finally, we got to a place where people were starting to have conversations –  uncomfortable conversations, necessary conversations. Uncomfortable and necessary and maybe too brief, but yo, some people were at least willing to engage. This is progress. It’s just a drop in the bucket overall, but it represents a huge shift in mindset from just a few years prior.

“What are we doing wrong?”

“How do we make our culture inclusive?”

People, teams, and companies are starting to ask these questions for a variety of reasons. Some people (like me) see diversity in our tech spaces as a moral imperative; while others (also, me) might see dollar signs (businesses do exist to make money, after all).

But whatever the motivation, I hope next we’ll start to see the industry as a whole move past this eternal “conversation” phase and start risking action. It’s gonna be hard and weird, and it’s gonna take a really, really long time, but it’s so, so necessary. And heck, we’re not in this alone; there is a conversation happening in the larger political sphere. We need to establish some goals and realize we’re not the only creative industry that’s charged with tackling political stuffs. Learn from each other. Stop making the same mistakes. Succeed together.

8. Anything else you want to add?
I’ve watched this industry change from beeps and boops to full orchestral arrangements, from sprite density measured in the dozens to measured in whatever we measure it in now (ga-billions?), from perpetual single-player experiences to collective online communities that cross continents and smash all kinds of barriers – geographical, linguistic, and more. I’ve watched my childhood hobbies go from insulated nerdery to billion-dollar properties spanning the entire entertainment spectrum. Eight-year-old me would have never expected to see a Guardians of the Galaxy movie, and yet here we are waiting breathlessly for a sequel. What a time to be alive.

It’s been truly humbling to see where we came from, and I can’t wait to see what’s next. It’s my hope though, that as we continue to engage, we embrace change – scary as it may be – in our products, in our representation, and in our communities. We don’t get to be the only Artform out there immune from critique, and we need critique as an industry if we ever hope to break out of infancy and into our pimply adolescence. I’m excited to be a part of facilitating the richness of experience that only games can express. And I’m also excited to play some rad new titles that challenge how we think, how we define ourselves, and how we define what makes a game or a gamer.

I used to joke, “ehhhh, we’re game developers. We don’t save the world; we just make videogames.” But you know, who says video games can’t save the world? Now that I think about it, we’ve been saving it since 1983.